Australian sound engineer and inventor Joe Hayes has been at the forefront of cutting-edge sonic technology for more than 30 years. He continues to impress engineers and musicians around the world with his A3D acoustic technology and its application in the low-cost, high quality Emergence AS8 speaker system. It is a system which advances the diﬀusion technology used in many concert auditoriums around the world by producing diﬀusion at source in the speakers, rather than through expensive panels and room treatments. Here, Hayes explains the development of that system and recording engineers and experts Dr Toby Gifford and Ted Orr reveal how eﬀective it is in the studio and in the ﬁeld.

These experts’ views inform from the perspectives of professionals at the production stages through insights based on their adoption of the A3D system into the workflow.

About two years ago I was asked for a clear technical explanation of what A3D technology offered that was unique. To that point we knew how to ﬁne tune a Quadratic Residue Diffusor to a spherical wavefront and reach a point of audio nirvana where suddenly the audio cues of an acoustic space jumped out of the image. But that in itself did not explain why this happened. After considering just about everything available in the academic literature covering wavelets, seismic science DSP, diffusion, contemporary cochlea psycho-acoustics and neural biology, it was a Melbourne based academic Dr Toby Gifford who facilitated a breakthrough for us. We hired Toby to do a simple Matlab model of A3D and of normal piston radiators. The result was published at the AES Conference of Automotive Audio in 2017.

The model showed A3D emulates a point source: the sound-ﬁeld radiates power uniformly in all directions. For anyone who understands the art they will know this is a good thing. But not necessarily unique to A3D. Then we noticed that an unusually ‘shimmering’ quality to the polar sound ﬁelds that act at a higher frequency multiple. The wild thing about all of this is with the A3D process you hear the room cues in the recording as though they are those of the listening space. It is like they are real acoustics.

Purple = 15,000Hz, Yellow = 9,000Hz, Red = 5,000Hz, Blue = 2,000Hz. Across the bottom is 8 cycles of 2,000Hz. Animation shows sound intensity patterns as the 2,000Hz sine wave moves through its cycles. It’s these patterns that change (at a speed of 4 x the frequency of the signal) that completely diffuse the listening pace eliminating specular reflections.

Then recently Toby broke through, on this shimmering quality. Using his considerable math skills and understanding of time and space manifolds he realised the shimmering in the A3D wavefront is an Eikonal of the QRD itself!

But before Dr Gifford explains this in his own words, it’s important to mention one of the great contributors to A3D, loudspeaker engineer Brad Serhan who provided guidance in terms of the fine-tuning/voicing. I knew we needed someone who was prepared to take on technical challenges. In the movie, Apollo 13 Jim Lovell's mum is quoted as saying “... if they could make a washing machine fly, Jim could fly it!” Similarly, I say “… if you can make it vibrate, Brad Serhan could tune it to its maximum musicality!”

Brad was fearless in tuning the first A3D systems and, through that, we first noticed “another presence” in the sound field. Through his dedication to his craft, we were able to determine the tolerance we could work with.  As a direct result, we now have the maturity of this new technology we need for licensing it. A3D technology emulates a point source: the sound-ﬁeld radiates power uniformly in all directions. This minimises sound-ﬁeld distortion from self-interference that is typical of traditional membrane drivers. In particular it streamlines the air particle velocities along the direction of radiation, minimising off-axis (tangential) energy that is associated with non-uniform sound radiation. As a consequence spatial information encoded in stereo recording is maintained in pristine form by A3D, whereas traditional loudspeakers distort this information by confounding it with directionally confusing ‘eddies’ formed by self-interference. Thus, A3D enhances signal to noise ratio by allowing for physically larger drivers (with greater capacity to excite a sound-ﬁeld) to behave like small point sources.

I live in the artist-rich ‘most famous small-town on Earth’ Woodstock, NY. I was drawn here by the Creative Music Studio (CMS), a school for avant-garde jazz and world music which was started by Ornette Coleman and now run by award winning vibraphonist/pianist/composer, Karl Berger.

During my time at CMS I developed many lasting relationships with some amazing musicians. And I was beginning to experiment with sampling, but found MIDI guitar controllers to be too slow. That’s when I was introduced to the Australian music manufacturer Passac and their MIDI guitar, the Sentient Six. I tried it out and was blown away because it actually worked unlike other models I had tried! Eventually, I was hired to be a product specialist and demo it at trade shows and music stores.

I was immediately impressed with the company and how open to suggestions they were. I met company president and founder Joe Hayes in 1984 at their San Jose ofﬁces. Joe always conveyed a sense that he could see issues from a completely different point of view than most and come up with solutions very quickly. I remember discussing a unity gain rack mount mixer for my guitar rack and he grabbed a piece of paper and started designing it right there and then, and it became the Passac Unity Eight. That unit became the centrepiece of many guitarists’ racks in the 90s including those of the custom rack designer of the stars, Bob Bradshaw.

As the 90s rolled in Joe was ready to move on from Passac. I had a chat with him about future endeavours, and we joked about him using fractal mathematics to come up with a “dereverberator”, a studio tool to remove excess room reﬂections. I heard from him again in about 1995, saying he had used fractal mathematics to come up with a revolutionary speaker design that could produce a “holographic” image, and would I be interested in delivering a pair to the renowned producer, Bill Laswell, who I knew from our shared alma mater, the Creative Music Studio. 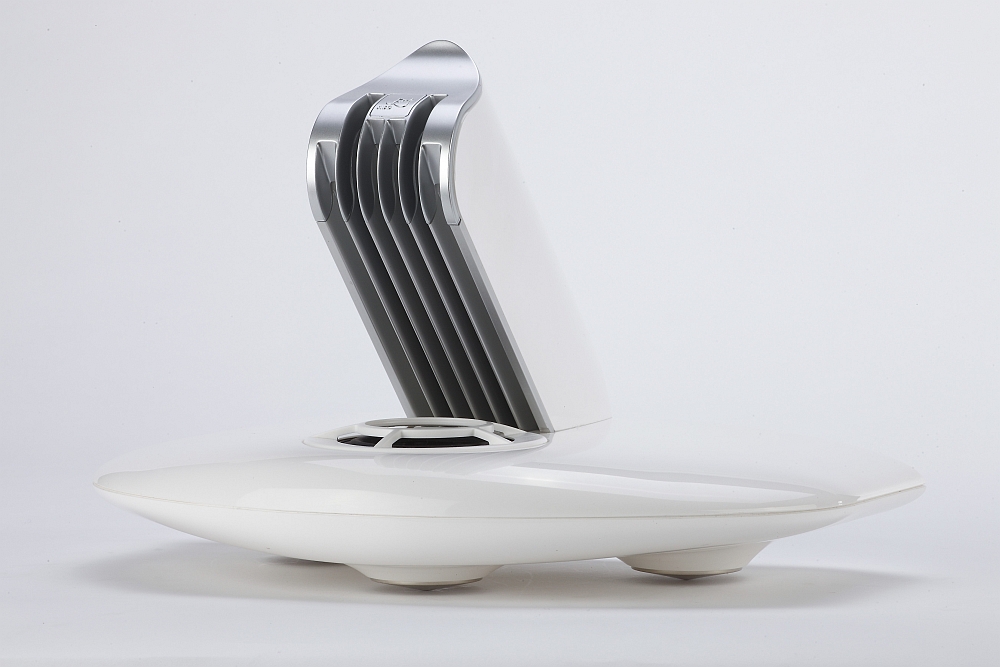 I tried them out too. At the time I was working a lot at Applehead Studio in Woodstock, when it was at Michael Lang’s studio space, built for Joe Cocker. Studio owner Mike Birnbaum and I were amazed at once, from the enormity of the stereo sweet spot and the depth of image coming from these funny looking things. It was like the image could be heard in stereo from anywhere in the room, something none of the other box speakers could do at all. Joe had taken them to the Musikmesse in Germany and someone wrote them up as being “the greatest revolution in speaker technology since the cone”. Pretty damn impressive statement!

I reconnected with Joe a few years ago as he was gearing up for manufacturing of the AS8 design and had just done a demo of the new model at Princeton University. He generously asked if I would like to take those speakers rather than ship them all the way back to Australia. They arrived a few days later and I plugged them in at Karl Berger’s Sertso Studio, where I am the head engineer. Again I was amazed at the stereo image, which seemed to follow you no matter where you were positioned in the room.

Joe had remarked how they sound the same in a tiled bathroom as they do outdoors, in that their design eliminates the room reﬂections (which made me think of the ‘dereverberator’ we had talked about years before). This feature was of particular interest to me at Sertso, because the control room is small and bass frequencies tend to sound bigger than they are in reality because of the room shape and size. I began using them for mixing and mastering and was again immediately impressed with the results, which translated very well to all other playback systems.

Sertso Studio is primarily used for Karl’s personal jazz projects and our bread and butter comes from doing digital archives, for which we have so far received two Grammy Foundation grants for. Our initial archive was for the Creative Music Studio archive of 450 tapes recorded from 1973 to 1983. When the speakers arrived I was had just ﬁnished tracking a jazz sextet record for Karl. The bassist, Ken Filiano has very particular requirements sonically for his pizzicato and arco playing. Because of the bass issues with the room, these were “hit or miss” repairs and required going to speakers in other rooms to hear the ultimate effect of the changes being made. I could instantly hear with much greater clarity than ever before exactly what needed to be changed with regard to the mix. Ken came for an editing session and we basically ﬂew through the alterations and every one sounded great, no matter what we played them back on.

In the few months I’ve had the speakers I have mastered ﬁve records (and went back and remastered a few of my own), as well as about 50 mixes, and now consider them to be one of the most valuable and useful tools in my audio chain.

When Joe asked if I knew of other prominent musicians I could connect him with, I said ‘absolutely!’ Musicians had to hear this. I’d been working (sometimes with my daughter Alana, the duchess of funk, on bass) for a decade with P-Funk offshoot band, 420 Funk Mob. I played them for the band leader, Michael Clip Payne. I met Clip as an engineer working on some of his projects, and have continued to engineer and play on almost all of his subsequent albums. He was very familiar with the way my studio sounded before getting these speakers and he too was immensely impressed by the sound once he heard them. I also contacted our sometime drummer, Zachary Alford (David Bowie, B52s, Bruce Springsteen), who was also tremendously impressed.

My son James is opening a multimedia facility for video, photography, 3D animation and music production, and these will certainly travel there with me on the sessions I will engineer for him.